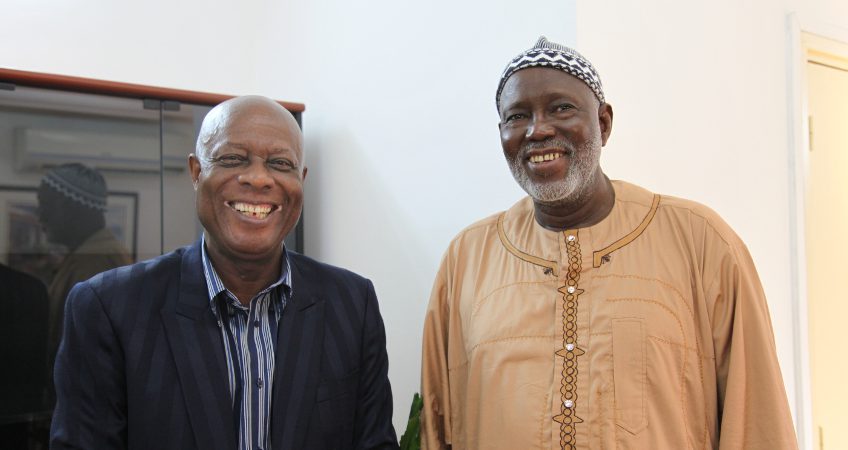 On November 30, 2017 in Abidjan, Dr Kouame Miezan, Executive Director of AfricaSeeds, met with Mr Mamadou Cissokho, Honorary President of ROPPA, the Network of farmers’ organizations and agricultural producers of West Africa. The purpose of the meeting was for the Executive Director of AfricaSeeds to present the panafrican seed institution to Mr Cissokho and engage with him on the issue of seeds in the development of the agricultural sector in Africa and discuss possible relationships between AfricaSeeds and ROPPA to promote seed sector development in Africa.

Dr Miezan presented his institution by first reminding the importance of seed for the transformation of agriculture in Africa and the primary role of small seed enterprises in the process of effective and sustainable development of the seed sector to support in particular the achievement of food and nutrition security on the continent. He then noted that the promotion and capacity building of small seed companies is an important element in AfricaSeeds’ strategy given their comparative advantages in providing quality seeds to producers, especially smallholder farmers.

The Honorary President of ROPPA also recognized the crucial importance of seed in the transformation of African agriculture, while recalling, however, that the issue of seed cannot be treated in isolation from other inputs such as fertilizers. Indeed, for him, whatever the quality of the seed of a high-yielding variety, the latter cannot fully express its potential if it is grown on poor soils or with unsuitable practices. He therefore recommended to use quality seeds in association with fertilizers supported by extension services concerned by local needs.

Regarding seed quality, the Honorary President of ROPPA deplored the lack of effective quality assurance systems for seeds sold on the markets to farmers in West Africa, and the absence of a supervisory body which any irregularities could be reported to. Farmers are thus in a position of extreme vulnerability and seed producers, for their part, have no incentive to do better.

According to Mr Cissokho, the operationalization of a supervisory body that could enforce the rules established by ECOWAS on the quality of basic and pre-basic seeds would help guarantee the quality of seeds produced by seed producers and put on the market.

The importance of soil quality, climate change, the need to take into account the concerns of smallholder farmers in Africa’s agricultural development initiatives, and job creation in the agricultural sector in general to retain young Africans on the continent have also been discussed.

A potential partnership with ROPPA under the ASBP

The Executive Director of AfricaSeeds assured the Honorary President of ROPPA that the African Union Seed Program adopted by the Heads of State of the Union i.e. the African Seeds and Biotechnology Program (ASBP) which AfricaSeeds is in charge of coordinating and implementing, addresses the issue of seeds in an inclusive and integrated way, and therefore all of the points discussed above are among the challenges to be addressed by the program.

The discussions were very cordial. The Executive Director of AfricaSeeds and the Honorary President of ROPPA have pledged to work for continuation of the dialogue with a view to developing effective and productive collaborations between AfricaSeeds and ROPPA for a sustainable development of the seed sector in Africa.