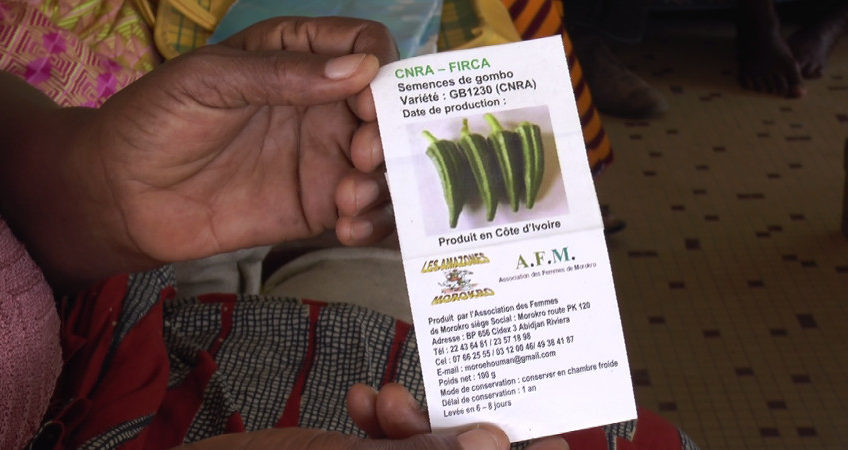 From December 5 to 10, 2016, an exploratory mission was jointly conducted by AfricaSeeds and the Interprofessional Fund for Research and Agricultural Council (FIRCA) in the vegetable production areas in west-central Côte d’Ivoire for the implementation of a plan to improve the production of quality seeds of local vegetable crops.

Vegetable crops play a key role in Ivorian agricultural production, both as source of income and in terms of nutritional value for the population. The availability of quality seeds for these crops is a fundamental factor in stabilizing and improving the country’s vegetable production.

The projects of FIRCA and the program to promote growth of the agricultural sector in Côte d’Ivoire (PARFACI) target vegetable seed producers. To strengthen the impact of these projects, a mission was organized from 5 to 10 December to identify the sector major constraints and to propose more specific and effective solutions.

AfricaSeeds has been invited to accompany this mission in its capacity as a leader in the development of the seed sector in Africa and to allow the actors of the seed chain to better apprehend its work.

The mission was an opportunity for experts from FIRCA and AfricaSeeds to meet researchers from the National Research Centre, as well as seed multipliers and members of several vegetable seed production cooperatives, including tomato, pepper, okra and eggplant. The plots visited and the interviews that took place in the areas of Tiassalé, Bouaflé, Yamoussoukro, Sakassou and Abengourou allowed the mission to have a better appreciation of the state of development of the sector as well as the impact of projects in the field.

The mission identified three main constraints to be addressed. The first is the need to promote local seed more efficiently; local seeds are not well known nor appreciated by farmers. The second is the level of skills of seed producers, which would benefit from being supported to contribute to improving seed quality and availability. Finally, it was noted that the certification process should be made more flexible to allow any type of seed producer to access its benefits, which in turn affects farmers’ assurance of seed quality.

In the face of these constraints, the mission also ascertained the strong motivation of seed producers, as well as a vast potential for expansion of the sector both in terms of market demand, and land and workforce availability.

The mission was also an opportunity for AfricaSeeds to share its approach with seed producers in Côte d’Ivoire, with the aim of supporting inclusive agricultural transformation and food security. To this end, it is key to support grassroots initiatives in order to develop productive and competitive small seed enterprises.